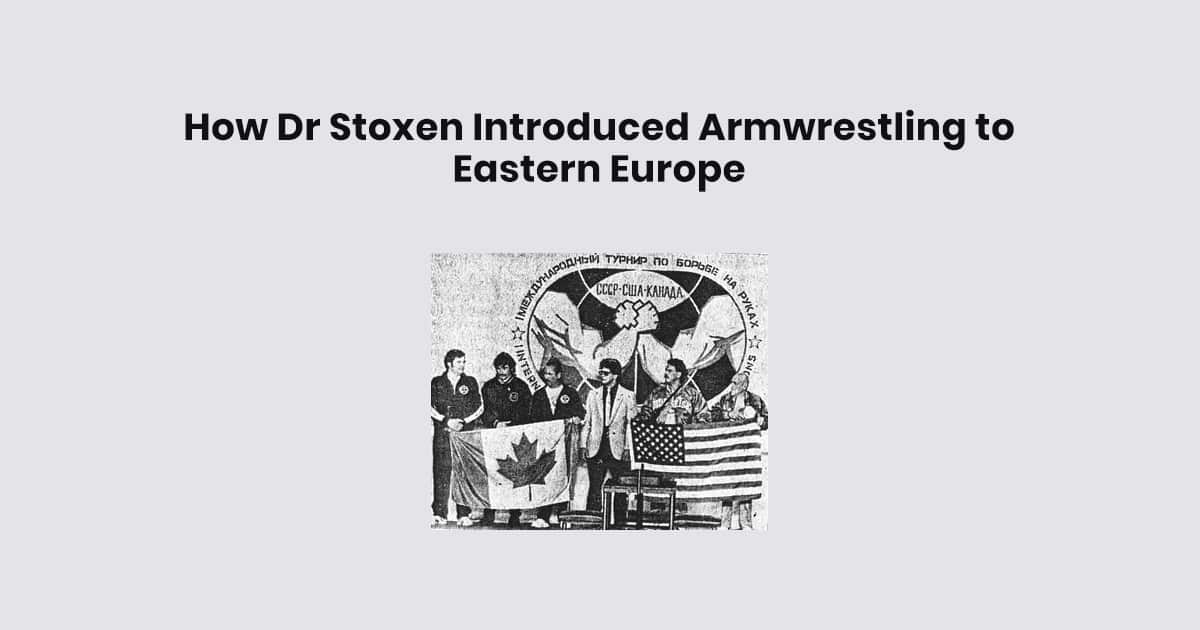 The introduction of the sport to the Soviet Union was yet another major step in the sport’s global expansion and is the focus of this story.

In late July 1988, Dr. James Stoxen, team physician for the American Armwrestling Association (AAA) and the American Powerlifting Federation, was in Russia serving as the USA team’s sports medicine representative at the first ever powerlifting competition between the US and the Soviet Union. While there, he met a Canadian sports exercise scientist by the name of Dr. Edmund Enos.

Dr. Enos was the Chairman of the Association for International Cultural Exchange Programs, a non-profit organization that specialized in coordinating such tours and events, and he was well connected with the USSR Ministry of Sport. Dr. Stoxen thought it would be amazing if he could help arrange a similar historic USA vs USSR armwrestling competition. Dr. Enos was unaware that armwrestling was an organized sport, but once he learned about the World Arm Wrestling Federation (WAWF), he agreed to initiate talks with the Ministry.

ollowing some negotiations, the Ministry consented to host the competition. A Canadian team would also be invited to compete. The details of the competition would be hashed out between Dr. Stoxen, Dr. Enos, and Dr. Vladamir Tchaikovsky, who was the president of the Bodybuilding and Powerlifitng Association of the USSR. (With armwrestling not yet existing in Russia, it was decided that it should initially fall under Dr. Tchaikovsky’s jurisdiction.)

To help the Soviets prepare, the WAWF supplied a professional video that had been made of the 1987 World Championships that were held in England. This became the Soviets’ primary source of information to analyze and determine how to train for the sport. An armwrestling table built to WAWF specifications was also donated, so that the hosts could learn how to build their own tables for the competition.

The event would be held the second week of August 1989 and was open to pullers of different levels of ability. In addition to the armwrestling competition, pullers would also get to enjoy an elaborate cultural and sightseeing program. A significant obstacle, however, was the cost. At $2,375 per person, it was not a trip that everyone could afford.

n addition to the competition itself, the North Americans would we conducting information sessions for the Soviets in which they would demonstrate armwrestling techniques and speak about how to train for the sport. The Soviets, on the other hand, would deliver lectures and practical sessions on their scientific approach to exercise and strength training.

New York’s Ray Darling and Florida’s Ray Taglione, both on the AAA Board of Directors, were selected to be the co-captains for Team USA and they became involved in helping arrange the armwrestling-related portions of the trip, while Dr. Stoxen continued to be the main contact for the tour itself.

Dr James Stoxen DC., FSSEMM (hon) FWSSEM
Dr James Stoxen DC., FSSEMM (hon) He is the president of Team Doctors®, Treatment and Training Center Chicago. Dr Stoxen is a #1 International Bestselling Author of the book, The Human Spring Approach to Thoracic Outlet Syndrome. He has lectured at more than 20 medical conferences on his Human Spring Approach to Thoracic Outlet Syndrome and asked to publish his research on this approach to treating thoracic outlet syndrome in over 30 peer review medical journals. He has been asked to submit his other research on the human spring approach to treatment, training and prevention in over 225 peer review medical journals. He serves as the Editor-in-Chief of the Journal of Orthopedic Science and Research, Executive Editor or the Journal of Trauma and Acute Care, Chief Editor, Advances in Orthopedics and Sports Medicine Journal and editorial board for over 40 peer review medical journals. He is a much sought-after speaker both to the general public and at CME credentialed medical conferences. He has given over 1000 live presentations and lectured at over 70 medical conferences to over 50,000 doctors in more than 20 countries. He has been invited to speak at over 400 medical conferences in over 50 international cities in 30 countries. He has been invited as the keynote speaker at over 60 medical conferences. After his groundbreaking lecture on the Integrated Spring-Mass Model at the World Congress of Sports and Exercise Medicine he was presented with an Honorary Fellowship Award by a member of the royal family, the Sultan of Pahang, for his distinguished research and contributions to the advancement of Sports and Exercise Medicine on an International level. He was inducted into the National Fitness Hall of Fame in 2008 and the Personal Trainers Hall of Fame in 2012. Dr Stoxen has a big reputation in the entertainment industry working as a doctor for over 150 tours of elite entertainers, caring for over 1000 top celebrity entertainers and their handlers. Anthony Field or the popular children’s entertainment group, The Wiggles, wrote a book, How I Got My Wiggle Back detailing his struggles with chronic pain and clinical depression he struggled with for years. Dr Stoxen is proud to be able to assist him. Physicians Medical Technologies does business as Team Doctors®, a medical device company that provides high end vibration massage tools. In 2012, the Massage Assist Pro was cleared by the FDA. Today the Massage Assist® is sold in 13 countries. In late 2019, Team Doctors launched the Vibeassage® which was cleared by the FDA in 2019 and has sold thousands of units around the world. Dr Stoxen can be reached directly at teamdoctors@aol.com

Dr James Stoxen DC., FSSEMM (hon) has been invited to join the Editorial Board of the International Journal of Cancer Research & Therapy 08 Aug 22 41 Views

Dr James Stoxen DC., FSSEMM (hon) has been appointed to the Editorial Board of the prestigious Journal of Orthopaedics and Pain Management 08 Aug 22 276 Views

Dr James Stoxen DC., FSSEMM (hon) has been appointed to the prestigious Editorial Board of the International Journal of Alzheimer’s Disease Research (IJADR) 08 Aug 22 15 Views

Dr James Stoxen DC., FSSEMM (hon) has been invited to speak at the 5th international conference on Pharmaceutics and Drug Delivery Research on December 2-4, 2022 08 Aug 22 15 Views

© Copyright 2021 All Rights Reserved by Drstoxen.com

Get the best of Dr Stoxen in your inbox

Accept & Close
Send this to a friend